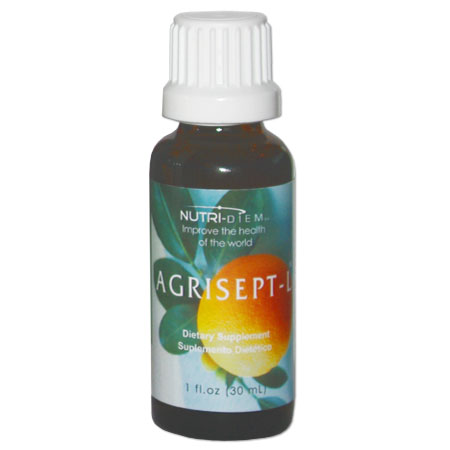 Grapefruit seed extract, or GSE for short, is one of the most useful, non-toxic, and health-enhancing extract.  It has many practical applications when it is used both topically (externally) and internally (as a nutritional supplement) in both cases agrisept should always be used diluted, with pure water. One bottle of Agrisept should last at least a month for one person with regular use.

Grapefruit seed extract is the liquid that is produced by crushing the seeds, pulp, and white membranes of grapefruit. Agrisept is an all-natural product that is made without the use of harmful and unhealthful solvents and synthetic agents. Agrisept is prepared by grinding the grapefruit seed and juiceless pulp, along with the seeds and pulp of tangerine and lemon, and then mixing with natural vegetable glycerin to stabilize the product and give it good consistency. Buyer beware: Some commercially available GSE is made from the seed, pulp, glycerin, but contains synthetic preservatives. There are no synthetic preservatives in Agrisept. Agrisept grapefruit seed extract is sold as a food supplement but the scientific evidence shows that it is a natural antimicrobial, and has the ability to combat bacteria, molds, fungus, and viruses.[1,2] There are conflicting scientific demonstrations of the efficacy of GSE.[1] Suspicions about the true nature of the active compounds in GSEs arose when synthetic additives were found in commercial products.[2] Suspected counterfeit grapefruit seed extracts were adulterated with synthetic preservatives.[8][9][10] When preservatives were not present in some of the extracts, laboratory tests found the natural extracts had no natural antimicrobial attributes of their own.[5] Some manufacturers of GSE have stated that their extract has compounds nearly identical to benzethonium chloride, but a 2001 study supervised by chemist G. Takeoka has documented that commercial GSE preparations contain the synthetic compound benzethonium chloride that could not have been made from GSE.[5]

The grapefruit tree was discovered on the Caribbean island of Barbados and was brought to Florida in 1823 for commercial cultivation.  It wasn’t until 1919 that a physicist born in Yugoslavia, Dr. Jacob Harich, (1919–1996), became an early proponent of GSE and brought his insight to Florida.[3] Michel Grise, the master formulator of Calorad and Agrisept, began producing Agrisept (called “Argumax” in Canada) from his nutraceutical manufacturing facility, Nutri-Diem, in Canada in 1983. This is his original Agrisept formulation. According to the Encyclopedia of Alternative Medicine, GSE possess antibacterial, antiviral, and antifungal properties.[3] GSE has been recommended by some nutritionists and alternative medical practitioners for the treatment of candidiasis, earache, throat infections, and diarrhea.[3]

GSE has been examined as an anti-parasitic, and a natural preservative. Scientific research has documented its ability to preserve and protect fruits and vegetables, as well as its ability to inhibit parasitic fungal, and bacteria infections. By the early 1990’s, GSE was being widely recommended for use by holistic health care professionals in order to protect the body from fungal, viral, and bacterial infections.

GSE has since been found to protect against a broad spectrum of bacteria including, but not limited to, salmonella, staphylococcus, streptococcus, and E. Coli.  It can also strongly inhibit many types of fungi and yeast.  One of its most common applications is for Candida Albicans (excessive yeast), leaving good flora in the system untouched (due to its low pH level) while destroying the bad.

There are some common external uses for the extract, including mouthwash, cold sores, acne, head lice, athlete’s foot, nail fungi and warts.  As an added benefit when used as a wash, GSE has been known to preserve meats, fruits and vegetables by killing molds, fungi, and more while clearing insecticide and herbicides (chemicals used to kill insects and weeds) found on our produce.

As a final note: the antiseptic action of GSE makes it an effective product for cuts and wound as well as washing dishes and utensils.  In fact, many hospitals in the United States use GSE as a sanitizing agent.

According to several scientific studies, GSE has pronounced antioxidant properties.[4,5] The seed extract and pulp are flavonoids,[6,7] and are a rich source of vitamin C [8,9,10]. One published study suggests the consumption of the bioactive compounds found in GSE may help suppress the development of colon cancer,[11], however this was a small in vitro (test tube) study, and no claims can be made for treating or curing cancer with this product. Furthermore, an animal study has demonstrated that the naringin flavonoid (found in GSE) is highly effective in lowering plasma lipid (cholesterol) and elevating (improving) plasma antioxidants, which should have a beneficial effect in reducing the risk of atherosclerosis and heart disease,[12], however no claims can be made for treating or mitigating any disease with this product since it is not a drug, but a nutritional supplement.

Grapefruit can have a number of interactions with certain drugs, increasing the blood levels and the potency of many compounds, including warfarin (coumadin).[13] Grapefruit has components that inhibit the CYP3A4 enzyme in the intestine. Thus, this effect that may increase the rate of absorption of several drugs. If you are taking a medication that interacts with grapefruit juice (see the product labeling), GSE may increase the blood levels of that medication. Check with your doctor before supplementing with GSE.

There are no reviews yet.

Be the first to review “Agricept-L” Cancel reply